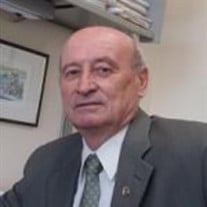 Dr. Bronislaw L. Slomiany, 79, of Rutherford, NJ, passed away on June 25, 2021. Dr. Slomiany completed Gimnazjum i Liceum Jan Zamoyski in Zamosc, Poland, after which he attended Lodz University, Lodz, Poland, earning a Master's Degree in Biochemistry in 1966. He emigrated to the United States in the same year moving to Wallington, NJ and later to Rutherford, NJ where he was a resident for almost 50 years. After completing his Ph.D. from New York Medical College in 1971, he began a long and fruitful scientific career as a medical university professor that spanned the next 50 years. Partners in their scientific achievements and life, he was always together with his wife of 54 years, Dr. Amalia Slomiany. His scientific work focused on the biochemistry of the gastrointestinal tract. He generated over 600 publications, 25 book chapters, and numerous presentations to national and international societies of his work. He traveled the world consulting with pharmaceutical companies and institutes on the design of innovative treatments for disease that have changed the practice of medicine. He was additionally involved in the education of countless medical and dental students throughout his career that have gone on to practice across the United States and trained over 50 postdoctoral fellows that are now leaders of scientific discovery at medical schools and universities around the world. His expertise was highly sought after as a member of 20 separate editorial boards, vetting and influencing advancement in the field of biochemistry. He was honored with Doctorate Honoris Causa in 1990 by the University of Medicine of Bialystok, Poland, and among other honors was chosen to the prestigious membership of the Polish Academy of Sciences. When not in the laboratory, he enjoyed history, architecture, travel, and outdoor pursuits including biking, skiing, soccer, and fishing. He was an advocate of historical preservation, tirelessly restoring the century-old family home in Rutherford, with the help of his wife and children, to its former glory. He was frequently to be found with his children playing soccer in the yard, taking them to practices, concerts, and school activities, and always instilling in them honor, strength, and determination. He traveled the world throughout his life, but one city beckoned him the most. He first discovered Charleston, SC, on a family vacation in 1980 and the family would return there countless times over the years. He became an expert on the history of the city, dedicating his final years to the restoration of one of its 19th-century homes in collaboration with the American College of Building Arts. He delighted in bringing friends and family to Charleston to go on walking tours, fishing and riding bikes on Kiawah Island, and relaxing on the beach. Dr. Slomiany was the beloved husband of Dr. Amalia Slomiany (nee Niewieczerzal) of Rutherford, NJ, cherished son of Eugenia Slomiany (nee Murdzia) and late Feliks Slomiany, devoted father of Lee Slomiany of Bound Brook, NJ, Dr. Beatrix A. Slomiany and her partner Jason Acree of Louisville, KY, and Dr. Mark G. Slomiany and his wife Dr. Jenny Slomiany, of Bronx, NY, loving grandfather of Leona and dear brother of the late Kazimierz Slomiany. In lieu of flowers, donations in Dr. Slomiany's name will benefit Oaks Integrated Care, Bound Brook House, (everloved.com/life-of/bronislaw-slomiany ) and would be kindly appreciated by his family.

The family of Dr. Bronislaw Leszek Slomiany created this Life Tributes page to make it easy to share your memories.