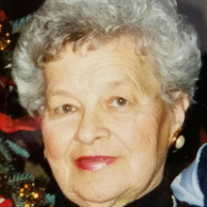 Helen Victoria “Gigi” Sudol (nee Galka), 92, of Wallington passed peacefully on Valentine's Day, Saturday, February 14, 2015 in Bristol, Rhode Island. Born in Passaic, she grew up there before marrying the late Bruno Sudol and moved to Wallington in 1946. She retired from Western Electric in Kearny after 25 years, prior to that, she also worked for Federal Telephone and Manhattan Rubber. She loved to cook and her pierogi and chicken noodle soup couldn’t be matched. Gigi was the life of any party, full of good humor, with a bit of mischief and a twinkle in her eye. She was the family clown, who always said she “had a good time.”! A parishioner of Most Sacred Heart of Jesus R.C. Church, Wallington, she was also a member of the American Legion Ladies Auxillary 359 and Pioneers Volunteer Network. In 2010, she moved to Portsmouth, Rhode Island to live with her only child, Paula Lowe (nee Sudol) and son-in-law Roderick Lowe. Besides her daughter and son-in-law, Gigi is survived by her granddaughter, Meredith Helen Bolton, and her husband, Robert, of Annapolis, Maryland, as well as, her grandson, Rory Bruce Lowe and his wife, Marissa, of Cherry Hill, New Jersey. In addition, she was a loving great-grandmother to her two great granddaughters, Brownyn Elizabeth Bolton and Gwenyth Maeve Lowe. Helen was the loving sister of John Galka Sr., Stashia Colon, Emil Galka and Frank Galka, all of whom predeceased her. She is survived by her dear sister, Irene Ziemba of Clifton and her beloved sister-in-law, Jean Bodek of Wallington.

The family of Helen Victoria "Gigi" Sudol created this Life Tributes page to make it easy to share your memories.

Send flowers to the Sudol family.