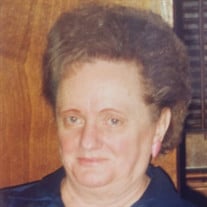 Jean Frances Bodek (nee Sudol), 94, of Wallington, passed peacefully on January 22, 2016 at Chestnut Hill Nursing and Convalescent Home, Passaic, where she had been a resident since June 2015. Born and raised in Wallington, Jean was engaged to Sgt. Bruno Krasowski of Lodi who was killed on Leyte, the Philippines, in 1944. Sgt. Krasowski was posthumously awarded the Silver Cross for gallantry in action. In 1948 she married Joseph Bodek of Wallington and was widowed in 1970. Jean was the model of a modern, independent working woman, who loved all animals, particularly Aslan, the boxer, and all music especially polkas and Michael Buble. Jean was a quiet loving woman, often found deep in thought. She was always a gift to her family. Prior to her retirement in 1976, she worked with ophthalmologist, Dr. Richard E. Lang, of Passaic for almost fifty years as his office manager and nursing assistant. Personally and professionally, hers was a life well lived. She was a lifelong member of Most Sacred Heart of Jesus Church in Wallington. Besides her beloved husband, Joseph, Jean was predeceased by her parents Paul and Aniela Kronstek Sudol, her sisters Lee Sudol Stack and Stella Sudol and her brother, Bruno Sudol. She was the loving aunt to Nicholas A. Stack, Jr., deceased, and Paula Sudol Lowe of Rhode Island, as well as the proud aunt, through marriage, of Edward Bodek Jr. of California and John Horai, Jr. of Maryland. Jean was further blessed to be the great aunt of Meredith Lowe Bolton and Rory Bruce Lowe, as well as the great-great aunt of Bronwyn Elizabeth Bolton and Gwenyth Maeve Lowe.

Jean Frances Bodek (nee Sudol), 94, of Wallington, passed peacefully on January 22, 2016 at Chestnut Hill Nursing and Convalescent Home, Passaic, where she had been a resident since June 2015. Born and raised in Wallington, Jean was engaged... View Obituary & Service Information

The family of Jean F. Bodek created this Life Tributes page to make it easy to share your memories.

Send flowers to the Bodek family.