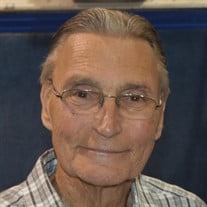 Joseph J. Skorupka, 73, a lifelong resident of Wallington, NJ passed away on Monday, October 28, 2019. Joseph owned Mizdol's Tavern in Wallington for over 25 years and worked for Bergen County Special Services for 18 years. After retiring in 2016, he worked part time for Precision Electric Motors in Clifton for 2 years. He was a parishioner of St. Mary's Assumption R.C. Church in Passaic and Most Sacred Heart of Jesus R.C. Church in Wallington. He was a graduate of Pope Pius XII in Passaic and was a proud Veteran of the United States Navy. He was also a member of the Slovak Catholic Sokol in Passaic and Hillside S.A.C. in Wallington. Joe was Wallington High School Soccer's #1 fan. He was also a passionate Tampa Bay Buccaneer and Arkansas Razorback football fan and his favorite pastime was spending time with his cherished grandchildren for sporting and other activities. Joseph was the devoted father of Jason Skorupka and his wife, Annemarie and their children Jack, Andrew and Brayden of Lincroft, NJ and Jody Skorupka and her husband, Peter Zielonka, and their children Nicholas, Alexander, and Anna of Wallington, NJ. Dear brother of Albert Skorupka and his wife Patti, of Pittsburgh, PA, Stephen Skorupka, of Stockholm, NJ, George Skorupka and his wife, Nancy, of Sparta, NJ, Carol E. Shaw, of Wallington, NJ and Jane Niven of Verona, NJ. He will be sorely missed by many loving cousins, nephews and nieces. Joseph was predeceased by his parents, Albert and Lillian Skorupka of Wallington, NJ.

Joseph J. Skorupka, 73, a lifelong resident of Wallington, NJ passed away on Monday, October 28, 2019. Joseph owned Mizdol's Tavern in Wallington for over 25 years and worked for Bergen County Special Services for 18 years. After retiring in... View Obituary & Service Information

The family of Joseph J. Skorupka created this Life Tributes page to make it easy to share your memories.

Send flowers to the Skorupka family.