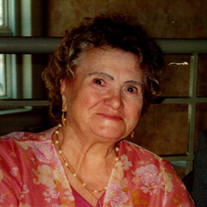 Leokadia Wiszowaty (nee Tolczyk), 87, of Paterson, passed away on Tuesday, October 6, 2015. She was born in Wilamowka, Poland, and lived there until the age of 37. She then left Poland to live in the United States in July of 1965. She initially settled in Jersey City and lived there until 1979, when she moved to Paterson, and has lived there until her death. Her interests were all about her family. Singing, sewing, cooking, hosting family gatherings, attending family celebrations, gardening, and visiting Atlantic City. She loved all of her family and truly embraced life. Above all, her Catholic faith was most important. She was a parishioner of St. Stephen's R.C. Church, Paterson, and a member of its Polish Rosary Society. She was a devout Catholic who devoted her life to God and daily prayers. Leokadia was the beloved wife of the late Jan Wiszowaty, dearest sister of Mairanna Kaminska, of Paterson, and the late Andrzej Tolczyk, Ewa Mieczkowska, and Helena Tolczyk, loving aunt of Ryszard Mieczkowski and Grazyna De Lorenzo (nee Mieczkowska), both of Wayne, Irena Milewski (nee Mieczkowska) and Krzysztof Mieczkowskli in Poland. Leokadia is also survived by many other loving great nieces, and great nephews; George Mieczkowski, Renata and Ricardo Pizzali, and children Victoria and Jonathon, Ewa and Tony D'Aleo, and daughters Brianna, Madelyn, and Isabella, Krystyna and Darius Szydlowski, and daughter Kathy, Barbara and Wieslaw Kulesza, and daughter Evelyn, Jerzy Milewski, Tomasz and Magdalena Milewski, and children Zofia and Kornela, Joanna and Chris Boczniewisz, and children Christian and Isabella, Radoslaw and Karolina Mieczkowski, Ewa Miewkowski, Diane and David Petracca, and Robert and Melissa De Lorenzo. She is also survived by her nieces and nephews by marriage; Lech Sowul, Grazyna and Zygmunt Poznar, and children, Barbara and Michael Cannela, and children, Ryszard Wiszowaty, Adam and Maria Wiszowaty, Elzbieta and Hrnry Pazoga, and many more extended family members and friends, both here and in Poland, of which she had many.

Leokadia Wiszowaty (nee Tolczyk), 87, of Paterson, passed away on Tuesday, October 6, 2015. She was born in Wilamowka, Poland, and lived there until the age of 37. She then left Poland to live in the United States in July of 1965. She initially... View Obituary & Service Information

The family of Leokadia Tolczyk Wiszowaty created this Life Tributes page to make it easy to share your memories.

Send flowers to the Wiszowaty family.