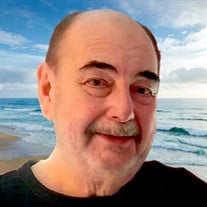 Leonard J. Matyka, 77, passed away on Thursday, July 8, 2021, peacefully at home. He was born in Passaic, NJ on April 21, 1944, to Walter and Stacia Matyka (nee Tomczyk). Leonard grew up in his early years in Garfield, NJ, moving briefly to Belleville and Wallington before settling with his wife Dorothy in their home in 1975 on the same street where he grew up. He attended Garfield High School where he graduated in 1962. He joined the United States Air Force, serving in the Vietnam War and ending his military career in 1968 in Alaska. He went to Rutgers University and obtained a Bachelor of Science degree in 1981. He started his professional career at the Harford Insurance Company, working his way through progressive insurance roles ultimately retiring from Decker Associates of Springfield, NJ in 2013. He saw many natural disasters as a senior claims adjustor, helping families recover from their losses with ongoing compassion and understanding for their suffering. Leonard married his beloved wife, Dorothy (nee Dobrowolski), in Holy Family Church, Nutley, NJ in 1970 and remained happily married until his death. They celebrated their 50th anniversary in October 2020. Leonard enjoyed fishing, the Jersey shore, traveling, and watching sports. He also enjoyed visits from his niece and great-niece and nephew. Leonard is survived by his spouse Dorothy of Garfield, NJ; his sister Sandra Stefanic (Tom) of Heathsville, VA; his brother-in-law, Michael Dobrowolski of Ewing, NJ; his niece Leslie Cifelli of Lyndhurst, NJ; his nephews, Matthew Ruane of FL, Jonathan and Adam Dobrowolski of NJ; his great-nephew Louis Cifelli (Christa) and his great-niece Samantha Cifelli (and her partner Oscar Bravo). He is also survived by many friends and extended family. In lieu of flowers, donations in Leonard's name to the Kessler Institute for Rehabilitation (300 Market Street Saddle Brook, NJ 07663) would be kindly appreciated by his family.

Leonard J. Matyka, 77, passed away on Thursday, July 8, 2021, peacefully at home. He was born in Passaic, NJ on April 21, 1944, to Walter and Stacia Matyka (nee Tomczyk). Leonard grew up in his early years in Garfield, NJ, moving briefly to... View Obituary & Service Information

The family of Leonard Joseph Matyka created this Life Tributes page to make it easy to share your memories.