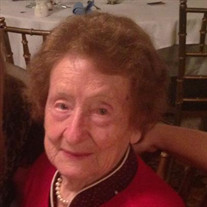 Maria Kasica Wojdylo, 95, of Garfield, passed away Tuesday, August 25, 2015. Born in Rusinow, Poland, she came to the United States in 1975, and has lived in Garfield for 40 years. Prior to her retirement, she was a seamstress for several manufacturing... View Obituary & Service Information

The family of Maria Wojdylo created this Life Tributes page to make it easy to share your memories.

Send flowers to the Wojdylo family.