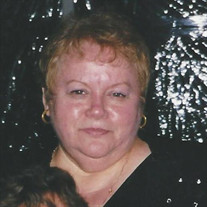 Theresa M. Proctor-Koziel (nee Walerko), 68, lifetime resident of Garfield, passed away Wednesday, January 18th, 2017. After Theresa graduated high school, she attended the Berkeley Business College. She worked for Maislin Trucking USA & Canada as a Customs Inspector for 15 years. She became an Avon representative and has been in their employ for 32 years. She has been a top seller as a representative and won numerous awards for her salesmanship abilities. She was also creative in making chocolate favors and a variety of decorative favors for all kinds of celebrations such as birthdays, bridal showers, and weddings. She had a dream of opening her own little store which she wanted to call "Apple Aunties". She was crazy about anything Apple and the color Red. She loved Christmas and enjoyed decorating her tree in the Victorian style. She was a good cook and it gave her great pleasure to make the traditional Polish dishes at Easter for her family. Theresa was the beloved wife of Edward Koziel, dearest sister of Louis W. Walden, and his wife Patricia, of Glen Rock, and Carolyn Swartz, and her partner Theo, of Brandt Beach, devoted daughter of the late Louis Peter and Stella (nee August) Walerko, loving aunt of Lisa Bonanno, and her husband Stephen, Justine West, Patrick Walden, Douglas Walden, and his partner Belle, great nieces Morgan and Kyah Bonanno, and late nephew Louis Walden Jr.

The family of Theresa M. Proctor-Koziel created this Life Tributes page to make it easy to share your memories.

Send flowers to the Proctor-Koziel family.