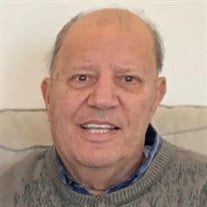 Walter Taormina born August 25, 1932 in Garfield to Joseph and Maria Taormina. Survived by his amazing wife of 63 years, Alice Potosnak of Passaic. He leaves behind sons Walter James, Thomas and wife Joyce, Christopher and wife Tracy, and daughters Maryann, Carol and Laura. Also 8 Grandchildren T.J. and wife Jessica, Michael, Dana, Nina, Sara, Julia, Lauren and Allison and 2 Great Grandchildren Charlee Jane and Willa Faye. Pre-deceased by brothers Ben, Joseph and Salvatore, and sisters Sarah, Mary, Antoinette, Carmela and Rose. Survived by brother James Taormina of Saddle Brook. Walter graduated the class of 1950 of Garfield High School and went on to attend Fairleigh Dickinson University. He was a Korean War Veteran and member of the Garfield VFW Post No. 2867, serving as Chaplain. He was an accomplished pianist with the Sal Walter's Trio playing at various Holiday Inns, the Villa Allegra in Lodi, the Cotillion Restaurant in Garfield and Michael's Restaurant in Lyndhurst. He worked for the Givaudan Corporation in Clifton working as a Material Planner, retiring in 1990. He then went on to work part time for BBZ Livery and Kamienski Funeral Home. Walter proudly was a former Drum Major of the champion Holy Name Cadets Drum Corps, a baritone player with the Holy Name/Garfield Cadets Alumni, the New York Skyliners and the Hawthorne Caballeros Alumni Corps. He was an avid Yankee fan and proficient bowler and golfer. He was also a member of St. Joseph's Choir of East Rutherford. In lieu of flowers, memorial donations in Walter's name to your favorite charity would be kindly appreciated by his family.

The family of Walter Taormina created this Life Tributes page to make it easy to share your memories.